St Maur is the perfect drink for your big day

Internationally award-winning St Maur is an elderflower liqueur from the heart of England, handcrafted with elderflowers gathered in the ancient family-owned woodlands of its producers, the Earl and Countess of Yarmouth.

William and Kelsey Seymour first produced a celebration drink for their wedding guests at Ragley Hall in Warwickshire four years ago, before turning it into a thriving family business as St Maur.

William, who counts Henry VIII's wife Jane Seymour among his ancestors, is the eldest son of the Marquess of Hertford. He said: “We set out to create a drink with a taste and a perfume that would both work in the moment for a celebration and then in times to come once you put it on your lips it would conjure a memory of a lovely day.

“We chose elderflower because it is so evocative of the English summer, which is when we got married. We drew on old family recipes handed down on Kelsey’s side and we named it St Maur which is the surname the Seymours used in medieval times. We also gave St Maur the colour of love. It is a little drop of England’s heart.”

The couple’s love blossomed after a chance meeting sitting next to one another at a mutual friend’s wedding breakfast.

Kelsey recalls: “William was one of the kindest and most thoughtful people I’d ever met, and he made me laugh, until my sides were hurting. What followed wasn’t a whirlwind romance, but we knew straightaway it was special.”

“We were married at the end of June 2018 at Holy Trinity Church in Stratford-upon-Avon, with the sunlight streaming through the ancient stained glass. It was magical. William wanted our reception to be at Ragley Hall, his childhood home. As Earl of Yarmouth he will one day become the Marquess of Hertford, so there almost felt an obligation to put on a party at the old place.”

William added: “We have happy memories of our romance and our wedding day, and some from our time spent around the Ragley Estate when we were getting to know each other and for the short time we lived there when we were first married.”

“The grandeur of Ragley has long faded since my grandfather’s day, but nevertheless it did make a splendid location, and still does for a wedding. It was the most glorious summer’s day. So English. We have the strapline ‘love, share, enjoy’ for St Maur, and that’s what we set out to make our wedding day all about.”

Kelsey says: “St Maur can be enjoyed as a sip, on it’s own or over ice, and many people like to drink it that way. For a celebration though it really comes into its own by mixing the strong elderflower notes of St Maur with a fizz, a champagne or a dry sparkling wine. English sparkling wines are becoming real status drinks now, and replacing champagne in many instances, and are what we served at our wedding. We topped St Maur in a flute with a good English sparkling wine to make a royale cocktail, and served that as a reception drink. That’s where it all started.”

Within the first 18 months of its launch, St Maur had already won four awards, including The World Liqueur Awards ‘Best English Floral’ and Gold at the Global Spirits Awards in Las Vegas.

To find out more, visit www.drinkstmaur.com 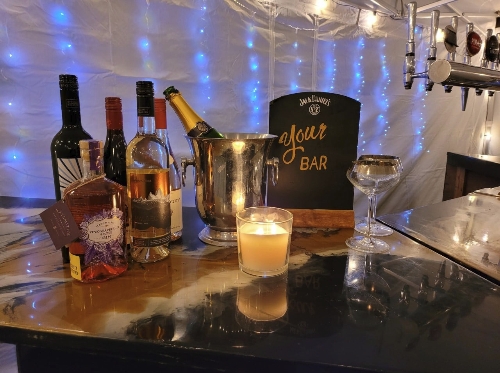 The Bank House Hotel in Worcester has announced its exciting new wedding...

Multi-award-winning St Maur has moved into a new premises

Multi-award-winning St Maur is a small batch of premium elderflower liqueur handcrafted in...

Let the fun be Gin!

Looking for summer holiday ginspiration? You can now get that festival feeling without the wellies as Festivals of Gin launch...