Dayton Grey Music first started in 2013 when Dayton was 32. "I was very shy, hence the late starts," says Dayton. "I initially performed as part of a duo named Domino with my close friend Helen Hale. Considering my shy nature, I was surprised to find myself so at home on stage, and I soon gained confidence! It wasn’t long before I added new solo shows A Tribute To The Legends of Soul & Motown, For The Love of Luther (Luther Vandross Tribute) and Old Skool Flava (classic R&B). This month, I debut Ocean Devotion (Billy Ocean Tribute).

"In 2014, I performed my first wedding as a soloist. The feeling was like no other! Eager to explore my place in the industry, I took part in several wedding fairs. Things took off quickly and all subsequent bookings came from recommendations, guests from previous weddings, social media, or TV shows.

"Then the pandemic hit. The impact on our amazing industry was devastating. It didn't just affect suppliers financially. Weddings planned by couples for years were suddenly, and heartbreakingly, cancelled and rescheduled only to be cancelled again. My wife and I spent countless hours consoling devastated couples, rearranging their original suppliers and being a soundboard during difficult times. One of my couples originally from the UK (now living in Dubai) came back to stay with their family. The groom contacted me, and we planned for me to do a surprise doorstep performance for his bride-to-be on the date I was supposed to sing at their wedding! Her reaction was priceless, and it was a moment I'll never forget!

"As a supplier, my wife and I become emotionally invested in each couple's special day. Being chosen is such an honour, one we never take for granted. Throughout the process, we create great relationships with the couples, so they feel like they are speaking to a trusted friend, rather than a service provider. I’m often rebooked to sing & DJ at their future events, christenings, birthdays, anniversaries. That's such a magical feeling!

"In 2021, I was awarded Wedding Musical Act of the Year in the West Midlands by The Wedding Industry Awards. Being my first time nominated, winning was a huge surprise! I was delighted to win the title again last month, for the second consecutive year! I'm now a national finalist, and the winner will be announced on February 23rd, 2022.

"In addition to performing covers, I write and record original music. Two recent collaborations with writer/producer Alex Lloyd went straight to number one in the Amazon Music charts! During the lockdown, I was approached to be the male lead of a new national theatre show, Endless Love. Phenomenal vocalist, Leanne Sandy, will perform Diana Ross' songs while I present Lionel Richie's hits. I feel privileged to have this opportunity and cannot wait to premiere the show at the Lighthouse Theatre, Kettering, on 26th February, 2022.

"Throughout my career, I’ve been blessed to share the stage on several occasions with Ray Lewis, former lead singer of The Drifters, invited to be an industry expert judge on BBC1’s All Together Now, and performed as a mystery singer on BBC1’s I Can See Your Voice. This month, I will be appearing on ITV's new primetime show, Starstruck. It has a real nostalgic Stars In Their Eyes feel! Olly Murs hosts and the panel features Jason Manford, Beverley Knight, Sheridan Smith, and Adam Lambert."

To find out more about Dayton Grey Music, visit www.daytongrey.co.uk 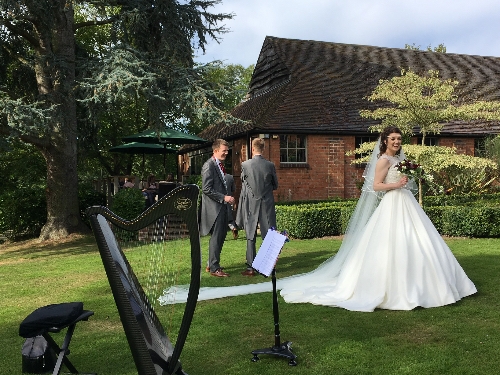 Ritz Diamonds has undergone a refurbishment

Ritz Diamonds, a Birmingham-based engagement ring specialist, has undergone a refurbishment. "We have...

"After being a make-up artist for many years, I wanted to create a beautiful...

Song choices for a woodland wedding

What could be more enchanting than the sound of a harp in a leafy woodland glade? Gently wafting melodies will...

From the 21st June, limits on wedding sizes lifted and couples across the country...

So when you decide to look for local suppliers, wedding retailers and service providers for your special day, our magazines can really help you plan your wedding.

We also have regular exciting wedding competitions and free giveaways, expert question & answer pages and lots more. Quite simply, all the information you will ever need to get married in your area.

We have 19 wedding titles covering counties and regions throughout most of England and Wales. Your West Midlands Wedding is available to download for free as a high quality eMagazine. Regional wedding magazines covering other areas are available here.