Look what catches the eye of the editor with a special emphasis in local wedding businesses, shops and suppliers in the West Midlands. 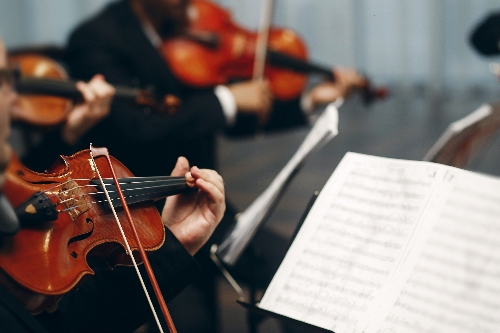 Musician Lynette Webster tells us what you should consider before booking a string quartet.

"When does the quartet play? We find it works well playing as the guests arrive and when the bride walks down the aisle and walks out. We can then continue into the drinks reception and break out into our very contemporary repertoire. People are often surprised at how many different genres a string quartet can cover, from classical to things like Guns N' Roses.

"Think about how you see the string quartet being a part of your day and get in touch with them to discuss your requirements."

To find out more about Lynette, visit www.capriccioquartet.co.uk 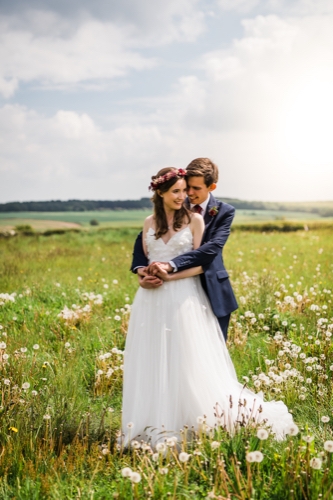 Inspired by their love of the great outdoors, Jess and Rupert tied the knot at the beautiful Coton House Farm Weddings & Events.

"We chose my childhood church for the ceremony, as it only seemed right to tie the knot in a beautiful, familiar setting with a fabulous organ," says Jess. "When choosing our reception venue, we wanted it to be in the countryside to tie in with our nature theme. I adore animals and loved the idea of a barn wedding, so Coton House Farm Weddings & Events was perfect. We loved the fact that it had beautiful views and a paddock for outdoor games."

Read the full real wedding in our August/September issue - available to download for free now. 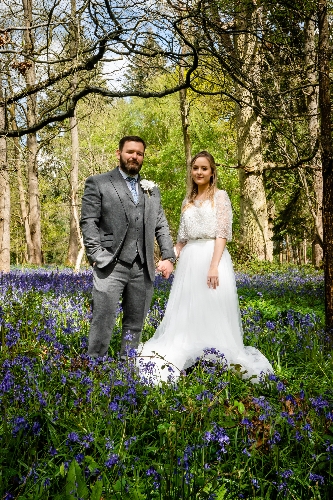 This styled shoot was put together by the talented Christianne Hemming from China Grey. “The theme was woodland boho,” says Christianne. “We wanted to complement the beautiful and natural surroundings of the ancient woodlands where we shot. The area belongs to the Earl of Yarmouth and is tucked away in a quiet corner of the county of Warwickshire, bordering Ragley Hall. Aptly named Ladies Wood, it's a private events venue and is home to the elderflowers that make the Earl's award-winning St Maur, a delicate and exquisite elderflower liqueur. We wanted to be as natural and organic as possible with simplistic design features while still taking full advantage of what nature had to offer. The ever-changing light added to the drama, and even a deluge and thunder didn't dampen our spirits."

See the full shoot in our August/September issue - available to download for free now. 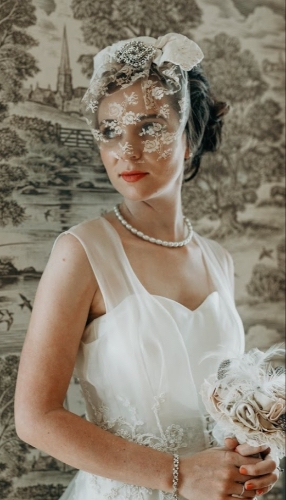 Read our full Jewellery and Accessories feature in our August/September issue - available to download for free now. 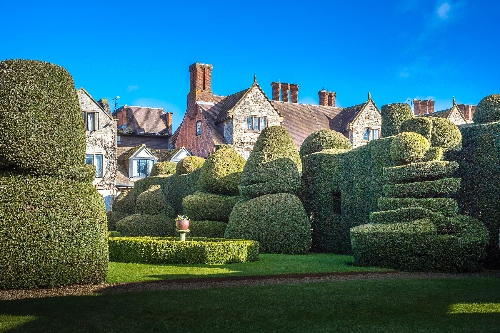 This 125-year-old property boasts charming grounds, a 11th-century church and an ornate topiary garden steeped in history. A variety of conference spaces have also been refreshed, and an ambient library adorned with a ceiling of floating books provides a light-filled area for relaxation, said to be where William Shakespeare wrote his famous comedy As You Like It.

Check out www.billesleymanor.com for more information.

Read more news in our August/September issue - available to download for free now. 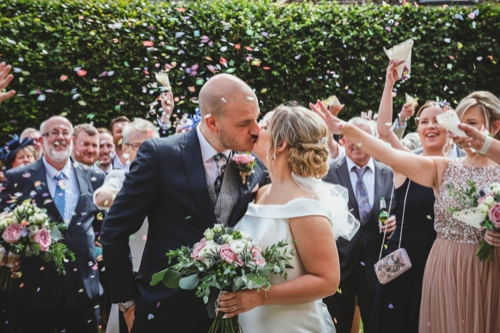 Jade and Paul met through mutual friends. “I think it's fair to say I was persistent,” laughs Jade. “Over time our relationship blossomed, and in November 2018, Paul proposed. It was a total surprise! We were visiting Bermuda for my 30th birthday and were playing miniature golf and having a few cocktails when Paul popped the question. Following this, we went onto New York for a four-day stay before returning home for my birthday."

“We liked that The Old Vicarage Hotel was a small family-run business,” says the bride. “It was also a blank canvas with lots of natural light. We didn't want people travelling too far, so the fact the hotel was just 30 minutes away from our home was ideal. It felt like a good compromise and offered a mixture of traditional and modern décor. We knew we didn't want to be planning a wedding for years, so when the pandemic happened, it allowed us to organise our perfect day within our budget. The venue provided the food which was tailored to suit our needs and tasted amazing.”

Read the full real wedding in our August/September issue - available to download for free now. 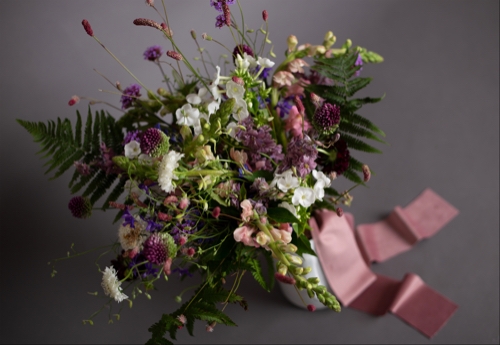 "I decided to do a City and Guilds Qualification in Floral Design after I was asked to do the flowers for my best friend's wedding as her florist was taken ill last minute. I loved the creativity of it and working with such beautiful materials. At first, I became disillusioned with turning it into a full- time career as the industry's poor ecological track record/impact on the environment just didn't sit well with my own moral viewpoint. It was only after coming across the wonderful Flowers from the Farm Organisation that I began to understand that it was possible to work with only British grown seasonal blooms and foliage, so last year after being offered some land to rent, I decided to sent up Twigg Floral Design Ltd. I now grow around 80 per cent of my stock without using chemicals or single- use plastics and supplement when needed from other British growers."

To find out more about Megan, visit www.twiggflowers.co.uk

Read the full flowers feature in our August/September issue - available to download for free now. 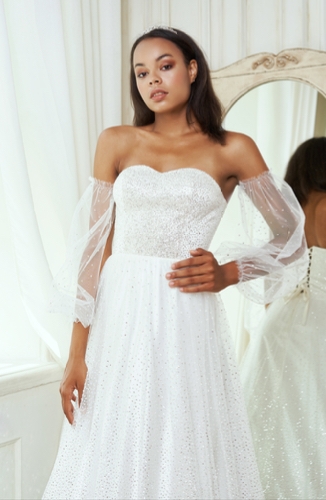 Make-up artist Amy Coyne tells us what the latest trends are for summer brides.

"The most popular colours requested this season are rose gold and blush pinks. These work well on most skin tones and eye colours.

"As a make-up artist, my goal is to enhance your beautiful. My brides love shimmery eyes teamed with glowing flawless skin, which is what you want when all eyes are on you on your special day."

To find out more about Amy, visit www.instagram.com/amycoynemua

Read the full feature in our August/September issue - available to download for free now. 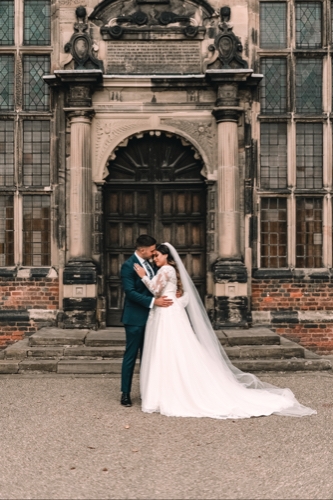 Arusa and Ahkum met on a dating site. “I was the one who made the first move by swiping on his profile and sending a message,” says Arusa. “He responded, and we clicked straight away. It was as though we'd known each other forever. We had a lot of banter, but the conversation was cut short as he was getting to know someone else and was due to go on a date with her. I respected this and asked to be friends, however, we did not speak again. Half a month or so later, Ahkum sent me a message stating the date didn't go well, and I was the first person he thought to message. He was attracted to my confidence, smile and how we could talk about anything and I was drawn to his physical appearance (of course), his honesty and the fact that he showed respect and integrity from the beginning, which is a rare quality to find.”

Ahkum popped the question on the 17 May, 2020, without a ring due to COVID-19. “It was during a picnic in Sunbury Park,” shares the bride. “The date wasn't significant in any way, but it was a surprise. He decided he wanted to be with me forever and the distance between Birmingham and London was far more than the both of us were willing to handle especially given the pandemic, which didn't allow us to be together for months on end. COVID-19 actually brought us together in a weird way, and we grew stronger and closer. He officially proposed on the 6th July, 2020, at Sunbury Park, but this time with a ring we'd bought together.”

Read the full wedding in our August/September issue - available to download for free now. 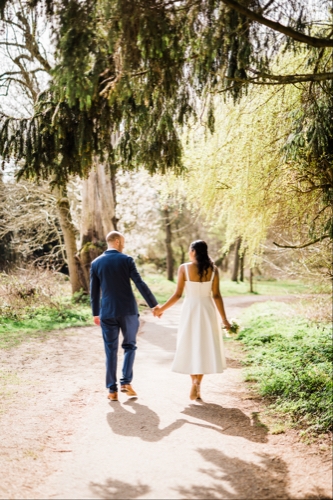 Photographer Charlotte Mail tells us what you should ask your photographer if you'd had to postpone due to COVID-19.

"We've all had to adapt and be more flexible after so many postponements," says Charlotte. "If you have no choice but to move your wedding date, most photographers should be happy to reschedule, providing they're available. Here are a few key questions to ask:

"What is your policy if we're required to postpone our wedding due to the pandemic?

"Will there be any changes in price if we are postponing to the following year?

"What is your policy regarding deposits in the event that you're not available on the date we would like to postpone to?

"It's also important to check what the photographer's backup plan is if they were to fall ill on your wedding day. Like myself, most suppliers will have a network of fellow photographers that they can contact if they're unable to shoot your wedding.

"When you're ready to book, your photographer should send you a contract to complete. Always read the content carefully before signing, and don't worry about asking any questions if you are uncertain about what the terms mean."

To find out more about Charlotte, visit www.charlottemailphotography.co.uk